'A strong learning community. Pupils are proud of their school. The broad curriculum and high prior attainment of pupils lead to strong achievement.' OFSTED 2019 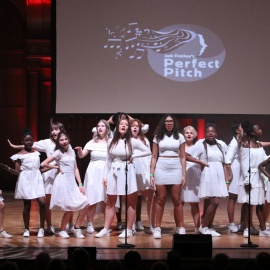 On Sunday 1 March, Noteworthy, our A Cappella group performed at the Jack Petchey Perfect Pitch Grand Final at Cadogan Hall. This is a competition that has happened twice and invites a cappella groups in London and Essex to audition and take part. Noteworthy won the first competition that took place  in 2018 at Broadway Theatre in Barking. The grand Final on Sunday was a result of three regional finals in London and Essex in January this year. Noteworthy won the regional final at the Epsom Playhouse in January which meant they would perform at the Grand Final at Cadogan hall, a very prestigious venue in Sloane Square.

The Grand Final was an amazing experience and it involved 12 a cappella groups and approximately 240 students on stage for the finale. The whole competition included 30 groups and over 700 students so the final was a really thrilling culmination of all the hard work. Noteworthy were declared the champions of the competition and we are all absolutely thrilled and so proud of this achievement. I would like to extend my massive congratulations to all the members of the group who have shown real dedication, energy, musicality, talent and outstanding teamwork. This is an incredible experience that we will all remember and treasure for many years to come.